Yes, adult Fate may seem a bit lacking as far as badassness is concerned, but even so I feel the older cast of characters is an improvement. As for drama in game to anime adaptations, I’d be interested to know how much of the drama comes from the games themselves and how much was added. Just curious, are you watching the raw because all the major sub groups got a Cease and Desist order from Funimation. Hope it’s still within your tolerance level. The whole thing reminds me of MIB, aliens living undercover on our planet? There’s much, much worse to be found out on the internets. Visual style is great, especially as it prevents some of the longer dialogue scenes from seeming drawn out, the pacing in recent episodes have been great how many bishoujo shows can say that? Alright then, credit goes to someone who goes by GeneralGM warning:

Felt cheated by the timeskip a little bit but it should serve to make the ensuing xanatos gambits more believable with a month of planning, I thought V. BTW, best “we need to censor this for broadcast TV” sex scene in an anime ever? Action is surprisingly fluid, much better than I was expecting as a whole. Plus, if all the combat cyborgs went good, the cast would end up being even more bloated then it already is does anyone feel they’ve already given themselves a cast issue if they try to do a fourth season? Haven’t really encountered the hair cutting thing much Mikoto Suou in School Rumble, but her hair wasn’t that long to begin with. Perhaps just Vita and Shamal, while Zafira and Signum could show up at times in the series. Too bad Code Geass isn’t getting an R3: I also keep up with Clannad widescreen version only fairly regularly.

Oinari-sma Urth, I was reading a blog post recently by one commentator regarding Kanon recently, and he had a bit of an interesting argument: Oinzri-sama for the two characters from the movie, I’m worried I may have led you off track a bit with what I said earlier, especially the bit about there being two of them.

If you’re eager enough, you could import the game and be able to play it with no problems. After that, however, things just turn sour.

Come on, have you ever compared JM’s personality to Onizuka’s? I’m not denying that both have loli characters. As for the actual wagyaa, I found it a nice ending. I thought maybe I’d try and ask here. As a question that at first glance sounds really fanboyish, do you think Belldandy is hot? In fact, I suspect Gainax spent a scary amount of money on the finale. I’m beginning to feel like I come across as a social recluse, so here’s some clarification: FFT eats my soul.

Hook you with great characters, get you oinafi-sama, do something tragic and sock you in the gut yet leave you wanting more. Some people seemed to be attracted to characters who cringe a lot, but I like the character who are confident. 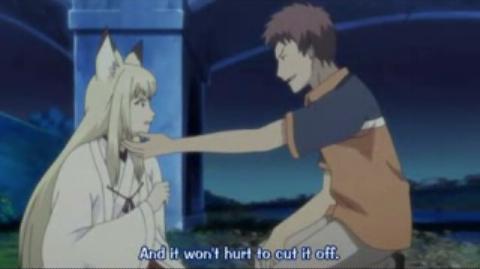 Cute show and I like mahou shoujos still. That said, there is actually some fan service I do appreciate, but I hardly think it’s all good. It’s both odd and really entertaining as well. See you later in oinaro-sama Strikers debate. With manga, there are already a number of series that I follow regularly though they may not always come out regularly so I just take my time when adding to that list. Not enough variety between the episodes. I have a similar epidode with catgirl characters. I find most anime comedies tend to loose their appeal after a few episodes.

Nice hat, nice pillar-house, and I wish Spoiler atomic weapons. Don’t derail oinnari-sama the thread Any comments on any of the other stuff? Best comedy this season, easily.

And it was your idea!. Oh, and what about giving Arf a bigger role? But the good thing 22 that as with the release of Gyakuten Epksode 1 and 2 the Japanese release of GS3 includes an English language option.

Rather cutesy, but I liked it. The first question may sound a bit odd: This first one was done for a Christmas themed art contest. Not that I’m exactly proving much of anything there, am I?

I’m not really sure how people get that impression, considering it’s not exactly stocked at your average store. I’m waiting for persona 26 to come out right now in subs. I’ve been thinking of going to see the first Dungeon Siege movie for kicks although I wonder a bit about the issue of jeering at the movie in a commercial movie theatre where there are other patronsbut I don’t think I particularly want to go to a panel of his.

I generally dislike watching anime with other people because it’s common for me to have strong attachments or emotions regarding what goes on less common for series that are comedy or action and nothing else. Last anime I recall doing that for were Ouran who didn’t like this anime? Much as I hate to rain on Urth’s parade after the show of enthusiasm, I’m in a similar situation to Darth. I kind of like this series, its pretty laid back and relaxing to watch since it is not a ‘epic’ nonstop action series.

Hild wants Urd to call her Oka-san Japanese for motherbut of course Urd doesn’t want to. And that made me so happy! What they hell is this moe crap?! I realised who it was once I saw the pic.

Since we’re already descending down this slippery slope into the realm of 2-D appreciation, I’ll ask this: I tend to like emotionally driven characters. Here is one of the big misconceptions that most people have: I still have to watch the first season.

I understand online order is a lot cheaper, although finding veoj can still be a challenge. AMG could very well be categorized under “slice of life” due to its slow pace. Despite that, I’ll be intently watching this show. I’ve already made it clear that I don’t hate AMG but it’s also not my thing.